He could be intelligent. He might be productive. But he’s still just a primate with a powertool. 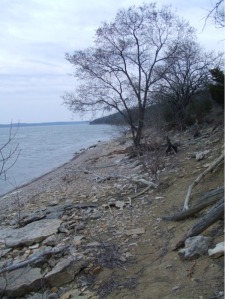 So, as could be expected, I waited until the last weekend of March to get my camping trip in.  I was really hoping it would warm up and stay above 40F over night.  That wasn’t quite the case, but it was bearable.

I started planning on Wednesday for my over-nighter on Friday.  I made a few emails to attempt recruiting participants… no such luck.  Jen was into the idea until she saw the forecast: over night lows around freezing.  I have gone camping in far colder temperatures and had a good time, so I wasn’t too concerned.  This would be the first time that I have ever gone solo, and I was really looking forward to it.

I decided on a Kansas state park about an hour away.  Jen and I had gone there in 2006 and found a hike-in trail with several campsites along the lake.  It was exceptionally windy that day but still a good little trip.

I left work early, ran a few errands and got my stuff together.  I left KC right around 6:00PM and arrived roughly an hour later.  I didn’t bother looking up directions to the hike-in site, because I figured I would remeber the way once I got there, or I could ask somebody.

I paid my day-pass and asked where the hike-in site was (yeah, memory not serving me well).  The friendly park staff pointed me in the direction.  I got to where they told me to park and hiked in.  I pretty much knew from where I parked that this was not the same area as we were in last time, but I thought I would check it out regardless.  The sun was beginning to set and I wanted to get the tent pitched and a fire started.

I hiked in the the area they pointed me to.  It wasn’t the trail that I had remembered.  It was the boy scout walk-in area: pretty much an open field with a short trail at the back that lead to a smaller wooded campsite.  Onsetting darkness provoked me to explore the back area.  I followed the back trail past the wooded site to a trail intersection, and headed toward the water.

Now, I really don’t know if this area was still included in the hike-in/walk-in camping area, but the map made it look like it was.  I found a nice rocky beach area that would be suitable for camp.  I pitched the tent and then got a fire going.  There was a ton of dry driftwood that would keep me warm for the night.

Not much happened through the night.  The only thing of note was a skunk that came down from the woods to eat some dead fish.  He didn’t seem to mind me being there.  When he got within about 20 feet, I stood up and turn my light on him.  Luckily, all he did was run away.

Ok, one problem I had, was I set my tent on a bit of a slope to the side.  So while I was sleeping, I kept sliding off of my mat.  That’s what I get for setting up in the dark and not paying attention.

The cold set in around 3:00am, I knew this because of the inevitible bathroom break.  I probaly shouldn’t have had that 32oz hot cider before bed.  Cleaning up camp was a pain.  The wind was blowing, and it was the coldest it had been the entire time.

One of my friends was starting a 24 hour adventure race, at 8:00am, so I was going to try and catch him before they took off.  They ended up winning the 2-Person Open.  Good work INERTIA.